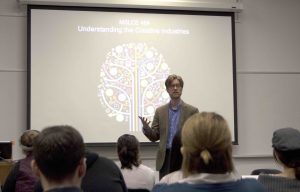 During the Fall quarter, MSLCE students took the foundational course “Understanding Creative Industries.” This course taught the history and current status of the creative and cultural enterprises. Students learned how advertising, regulation, globalization, digitalization, and talent have affected popular media industries such as film and music.

The seminar style classes opened up the floor to fascinating discussions on the complexity of art and industry. Students from many artistic backgrounds such as opera, theater, and visual art found that their industries had much in common when it came to marketing research or above the line talent. Through in-class videos, we learned how the media regulation system came into place and how it differs between self-regulation and government involvement.

One of the most interesting classroom topics was the role of advertising and media sponsorship within the film industries. From our readings and some archival videos, we saw how many big-budget films started out as completely produced by big advertising companies. As time went on, the separation between the film and ad agencies grew more distant. This is interesting to note in our current state of Film/TV where some content is dependent on product placement or abrupt in-show advertisements with actors having actual lines about the product.

A significant amount of the class was devoted to the final Transmedia Franchise project. With this, students were able to pitch an idea for an already existent creative franchise that can crossover into other industries to build its brand. Each student voted on a project and the projects with the most votes were made into groups.

For my group, we focused on turning “The Magic Treehouse” book series into a transmedia franchise. We created a plan to turn the books into a live-action TV series, touring children’s show, and an educational gaming app. For the project, we had to perform market research, tie in globalization, and figure out what talent and production companies to use. A fun component of our project was going out and shooting an original trailer for the TV show that really brought our concept to life. This project was an eye opener to all of the necessary preparation that goes into launching a new creative franchise.

Prof. Jacob Smith did an excellent job of covering the history and essential industry practices for creative enterprises. As a filmmaker and producer, this course has helped me approach my work with more competence and awareness of necessary procedures. I look forward to building on this foundational course as the new quarter approaches.