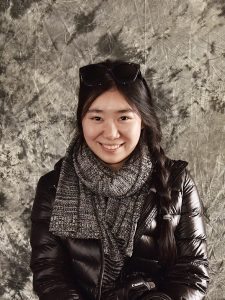 Wenli Liu wants to jump into the Chinese film industry. The Beijing native sees that China’s market “is booming right now,” and hopes that when she’s done with the MSLCE program she will be able to dive right in.

“The number of film productions is increasing every year by a pretty big percentage,” Liu said. “I hope I can help more talented directors and screenwriters to have more opportunities to generate more creative works besides the commercial products.”

Before beginning her coursework at Northwestern, Liu studied fine art at the School of the Art Institute Chicago. While pursuing her degree, she interned at a Chinese visual effects company. Though it was only a startup, the company had already made a big impact on 3D movies in the country. Liu has also worked for Chinese film crews and television series. One summer, while still an undergrad, Liu worked as a production director assistant at the most influential television station in China. She helped the director of the program promote the show.

“I jumped into the middle of shooting,” Liu said, “and I did more documentary stuff and helped my boss to post some updates and news.”

These experiences all helped Liu realize that she was really interested in working in the film industry.

“I really want to get into a film production company as a producer,” Liu said. “That’s my goal for now.”

Though still early on in the MSLCE program, Liu has already been inspired by the program’s trek to the Music Box, a movie theater and distribution company based in Chicago’s Southport Corridor.

“Before I went to the Music Box I had heard of it, thought of it as an independent theater,” Liu said. “But it also has film distribution, that’s really cool.”

The experience gave Liu a new dream job to aspire to: “The ideal job for me,” she said, “is a film distributor.”