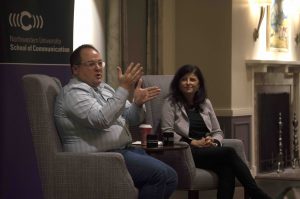 Chris Meador’s professional path that brought him from theater stages to the History Channel to Microsoft and, finally, to Facebook throughout a career he refers to as “strange and convoluted.”

However, Meador was quick to identify the running thread through all those jobs: the desire to connect.

Meador, who is the Brand Strategy Lead at Facebook, discussed his life, his career, and his insatiable appetite for learning on the job with Northwestern School of Communication Professor Leslie DeChurch during last Thursday’s MSLCE Speaker Series event.

“I wanted to be an actor, but then junior year of college, I realized I need health insurance,” Meador said to laughter at the start of the event. “And while I love the art, what I love is the business and the process that makes the art, which is everything that’s built around it.”

Meador’s decision to move from onstage to offstage in his professional aspirations led him to a variety of different work experiences throughout the rest of his undergraduate studies at Northwestern. He interned at ad agencies, talent agencies, law firms, and then realized, “what I liked was money, and the flow of money.”

Not making it, Meador was quick to point out, as much as understanding how to work within “value chains” to enhance them. He started to wonder, “Where were those opportunities?”

That philosophy brought him first to TV news, working for NBC to, among other things, develop a policy for anchors to use Twitter at the very start of the social networking platform. He also worked for the History Channel, where he led marketing consumer strategy for the channel’s miniseries “Hatfields and McCoys.” It was History Channel’s first aired scripted drama, and, with Meador’s help, it became (and remains) the channel’s highest rated show.

Both experiences spoke to Meador’s fascination with improving connections — between journalists and the news audience, and between television programming and viewers.

“I know I can connect with a consumer,” Meador said. It’s a skill he described as being able “to walk into a room and look at people and try to understand their motivations… and then build a story that brings them along.”

Meador’s excitement about his work was apparent from beginning to end of the event, throughout which he encouraged the audience to stay in touch with people and to always be learning.

“So much of my career has been built not on what my paycheck is but on what am I missing, what am I not learning,” Meador said, “because if I’m not learning, I’m not growing, and then I’m not interested.”