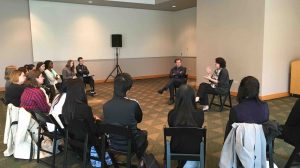 It was November of 1997 when the Chicago Shakespeare Theater’s eight-employee staff met with City of Chicago officials at a Gold Coast pub and struck a monumental deal. After signing a 90-year lease with the City, the theater prepared to make their risky move to a mostly uninhabited, bizarre Navy Pier.

How did the Chicago Shakespeare Theater (CST) evolve from a one-man show into one of the most successful regional theaters in the country? MSLCE students stopped by last Friday and sat down with the theater’s Executive Director Criss Henderson and Associate Producer Heather Schmucker to find out.

Prior to sitting down for a more formal conversation with Henderson and Schmucker, students received a brief overview of the space and the company’s productions. The MSLCE group also got a behind-the-scenes look backstage, which included a peek into CST’s wig room!

CST has seen a lot in its 30-year history. Eight months before its life-changing agreement with the City of Chicago, Henderson and his colleagues thought their organization had sadly come to an end. Today, however, the theater’s 650+ annual performances attracts around 225,000 people. Henderson and his staff still have vivid memories of the company’s past, and students were often encouraged to share some of their own uncertainties and concerns to help guide the conversation. Like most creative enterprises, the Chicago Shakespeare Theater was built on unknowns, so it only made sense to discuss some of the students’ questions and issues as they prepare to embark on their own creative endeavors.

One difficulty that Henderson brought up is the tension between the art and the business that his theater faces. In his words, it is the “institutionalization of theater.” Although CST is operating on a much larger budget than it ever was in the past, this isn’t necessarily a good thing. If anything, they make a creative business more rigid and less responsive to change, which is something that the theater relies on to remain fresh and innovative.

Schmucker jumped in. She made a point that CST is focusing more on civic participation as an opportunity to further engage with audiences, especially with students and young talent interested in acting and performing arts careers. However, this begs the question: is CST straying away from their core mission as an arts organization when there is this supposed underlying need to educate rather than simply perform?