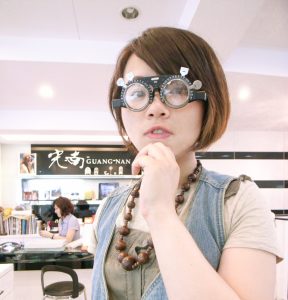 Reavens Lee’s dream job is to own a design and media company that focuses on culinary art. “Food has always been my core spirit,” she said. “I want to work with it creatively and make it my career.”

Lee’s first love was art. In junior high she enjoyed anime, and began drawing and taking photographs. She went on to major in graphic design at Columbia College Chicago and later worked as a freelance graphic designer and as the art director for Athena Design Group. Through these experiences she did design work for local and international restaurants and designed a cookbook. Now, she states, she has “formed an unbreakable bond with food.”

Lee is aware of the current interest in food preparation videos online. However, she wants to differentiate her business by making it more authentic and by focusing more on the food. “I feel a responsibility to preserve traditional cultures, while exploring ideas around fusion foods and experiences,” she said. “In our quest for diversity, we must beware of cultural appropriation.”

She notes that a lot of videos posted on YouTube or via BuzzFeed are about 30 seconds long, look similar and don’t focus on the value of the food. Lee hopes to encourage people to take a break from their fast-paced lives and enjoy their cuisine. She looks to start a “slow food movement” where people understand the importance of meals beyond just taking photos of dishes.

Initially Lee plans on managing her graphic design business and creating content for her YouTube channel. In 10 years she hopes to have expanded her YouTube channel and begin opening brick-and-mortar restaurants here in Chicago. Ultimately, however, she envisions an international franchise that celebrates the culinary arts. She said, “I want to do work that matters, functions across the mesh economy and has a positive ripple effect around the world.”