Adam Sachs Talks the Evolution of Podcasts at Northwestern 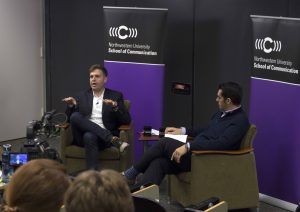 The podcast market has changed rapidly over the last few years, and Adam Sachs has been on the ground floor of that evolution.

“A few years ago, when we wanted to make a new podcast we’d find one or two people to chit chat and banter and hopefully it’d be entertaining,” he said last Thursday at Northwestern. “Because the barrier today for creating a podcast is so low, there is really a saturation of podcasts… It has become a lot more difficult to create a podcast that stands out.”

He would know. Sachs is the former CEO of Midroll Media, a leading podcast network that produces and monetizes some of the world’s most popular podcasts, including “WTF with Marc Maron” “The Bill Simmons Podcast” and “Comedy Bang! Bang!” He discussed his career and the trajectory of the podcast industry during a speaker series event co-presented by the MSLCE and the MA in Sound Arts and Industries programs.

The podcast industry has grown rapidly, Sachs explained, with 21% of Americans now listening to at least one a month. It was much smaller when Sachs first fell into it, something he says happened as a result of an “ear-opening experience.” A graduate of Northwestern’s Radio, Television, and Film (RTVF) program, Sachs joked he didn’t take any “R” classes while he was a student here. But when he started a group dating site that exploded in India, he often found himself on 15 hour flights to Mumbai. He would load his iPod with podcasts and and listen to them on the flight and in his hotel.

“I had podcasts as my companion,” he said.

When Match.com acquired his dating site, Sachs decided to jump into podcasts as his next step. He became COO of Midroll, then CEO. Soon after, the company was bought by EW Scripps Company after Scripps made it clear they would not mess with Midroll’s creative independence.

Now, as Sachs decides what his next step is, he has the opportunity to step back from the podcast world and see how far its come. A field that used to be dominated by “public radio and comedy nerds, basically all white dudes” has grown more diverse, more innovative, and more consequential. This is especially true in light of “Serial,” the true crime podcast that averaged 1.5 million listeners per episode and became what Sachs called a “cultural phenomenon.

“A couple years ago, sales meetings would start with ‘Can you tell us what a podcast is?’ and that was challenging,” he said. “That’s changed a lot.”