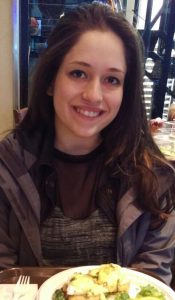 Avielle Suria is not sure if she wants to work for a nonprofit or a software company, but she is certain of one thing: she wants to “think creatively in whatever career path [she ends] up pursuing.”

Suria currently works part-time as an administrative coordinator for the Center for Independent Futures, which helps adults with disabilities live independently. She values the impact that volunteers and donors have on people and she enjoys cultivating relationships. Recently, however, she learned about the role of a project manager and is now interested in putting her soft skills to good use as well.

Suria was a studio art major while at Macalester College in St. Paul, Minnesota. During her senior year she did a fellowship with the Minnesota Historical Society. After graduation she volunteered with Lurie Children’s Hospital in downtown Chicago as a concierge, and found a mentor who worked in development. She later volunteered with the Field Museum in Chicago where she worked with the institutional advancement department. While these experiences did not persuade her to pursue museum studies, she did develop an interest in nonprofits.

“In an ideal scenario, where money would not be an issue, I would love to work in a museum in the development department,” she shared. However, she added, “It is not the most lucrative of careers so I am trying more to find the bridge in between.”

That bridge may come through integrating analytics with the arts. Suria is looking forward to taking an elective class on big data during the MSLCE program. She hopes to learn a programming language and determine if technology is a field she wants to enter.

“The mindset of a creative person is someone who thinks differently than an engineer,” she stated.

Ideally, she would love to use her interpersonal skills in the role of project manager at a software company.