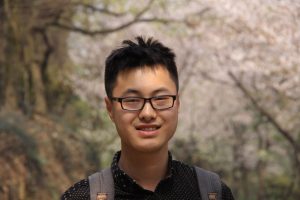 The Fudan University, Shanghai grad has been drawing since his youth, in part due to the influence from his mother who is an art teacher. Now, he wants to take his skills to the next level by learning how to do special effects for videos.

The Chinese Language and Literature major was part of his school’s Campus Culture Studio during his junior year. Students who have talent in art are chosen to design merchandise—such as bookmarks, cups, shoes, and bags—for the school and also other companies. This experience sparked his desire to one day own his own studio.

Huang’s past internships have also influenced his career goals. In 2014 he worked as an intern for Shanghai Canxing Cultural and Broadcast Company, which is owned by Star TV and produces The Voice of China. There he made videos promoting The Voice to be distributed worldwide. Also, over this past summer he served as the technology faculty assistant for New York University, Shanghai, where he made promotional videos for the school.

Huang imagines having his own creative studio where he can draw characters and use his designs for video animation, advertisements and info graphics. He shared that he is “happy” and “excited” when he is designing and overall really likes “creating things.” Huang envisions his brand being as well known as Disney and Mickey Mouse. “I want to sell my thoughts and design to the world,” he said.

The China native hopes to stay in the US after graduation from the MSLCE program and work at a studio in Los Angeles. He plans on learning from others until he is ready to start his own studio. He stated, “I’m particularly interested in how to run the business in this industry and learn the rules and principles.”