MSLCE Student Plays to the Tune of Her Own Trumpet 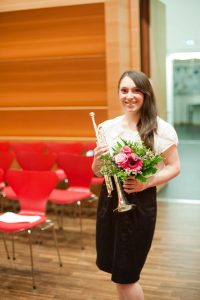 Samara Desrochers was born into a musical family.

The Canadian native has a lot of kin who play instruments, including her grandfather who played the trumpet. Desrochers started playing trumpet herself when she was only eight years old, but now she is interested in what happens off stage.

“I spent a lot of time doing concerts and recitals growing up,” she said. “As much fun as that was, I enjoy more behind-the-scenes aspects.”

“I found that really interesting so I thought that would be a nice segue,” she shared.

Desrochers’ dream job is to work as the special events coordinator for the Royal Ballet of Flanders in Antwerp, Belgium. After she finished her undergraduate degree she studied for a year at Hochschule Für Musik und Tanz Aachen, a performing arts school in Germany.

“It really opened my eyes to a part of the world I had no knowledge of,” she said. “I loved living in Europe for hundreds of reasons but the one that makes me really want to go back is the respect and appreciation I saw for the arts.”

Desrochers loves that the Royal Ballet of Flanders has its own orchestra and incorporates both ballet and opera. She hopes to work for the dance company because it would allow her to incorporate many different skills. Currently, however, she feels the need to further develop her skillset. She applied to the MSLCE program with the goal of becoming a “jack of all trades.” She stated, “I truly believe having this degree will open so many doors for me.”