MSLCE Student Looking to Make an Impact in TV + Film 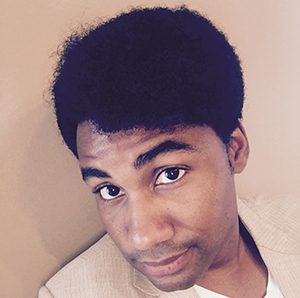 Quinton Sprull had a lot pulling him towards the MSLCE program.

Most importantly, the program was unlike anything he’d heard of before.

“I admired how the MSLCE program was thought through as a tool for aspiring creative leaders to gain an incredible foundation in leadership across various creative industries,” Sprull said.

Northwestern has already given Sprull many opportunities to pursue his passion for the arts. While studying learning and organizational change, he maintained a blog with the campus news outlet North by Northwestern, he hosted a radio show for WNUR, and he had a nightly news podcast.

The experiences cemented in him the belief that he wanted to do something creative with his life. Then, a four week intensive with the New York Film Academy helped steer Sprull more specifically towards film and television.

Drawing on his experience in journalism and entertainment, Sprull observed that his greatest hope professionally is to do something that leads to some sort of impact.

“The thread through all of what I do has to do with working with people and making an impact in their lives,” Sprull said. “No matter what I do in the program or in film I’m hoping I can bring that.”

Sprull is looking forward to learning the skills he will need to pursue a job in programming for some sort of creative outlet when he finishes. He is especially excited to learn more about the behind the scenes world of the entertainment industry through the MSLCE site visits and guest speakers.

“I’m really looking forward to learning how things work from the program and getting the chance to meet the visitors to the program and the site visits,” he said. “I really think my understanding of the world that I enjoy as an audience member is just going to grow tremendously.”