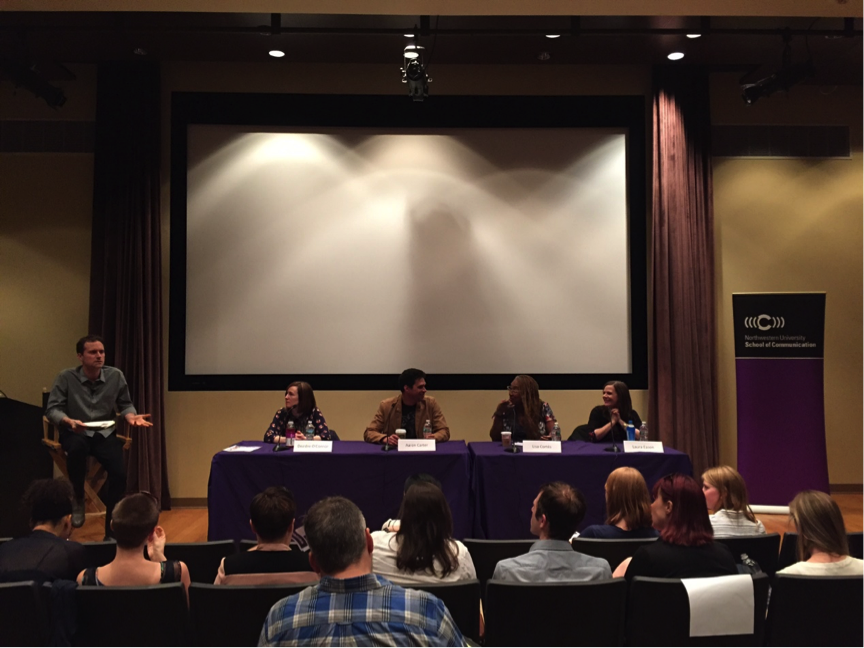 A group of people that included a Steppenwolf producer, a film producer, a writer for House of Cards, and a playwright met at Northwestern last Friday to discuss their writing processes during the 2016 Writers Panel co-hosted by the EPICS Office and the MFA in Writing for the Screen and Stage program.

The panel included Aaron Carter, an artistic producer at Steppenwolf Theatre Company who has worked on projects like The Way West by Mona Mansour and Airline Highway by Lisa D’Amour; Lisa Cortés, CEO of Cortés Films, who was the executive producer of the Academy Award and Sundance-winning film Precious; Laura Eason a playwright, screenwriter, and musical book writer who has also written for the hit Netflix show House of Cards; and Deidre O’Connor, a playwright and TV writer, who has written a full-length play called Jailbait.

One topic that came up during the discussion was how each panelist knows when they have the material for a great story. Cortés talked about telling the stories she wants to tell, but keeping those stories within budget: an innovative story line is great, but she said that she also needs to be aware of the amount of money each story costs. Carter said that he focuses on a story’s authenticity and its ability to surprise in determining whether or not this is a story that interests him. Most importantly for Carter is the question: has this story been told before?

The playwrights on the panel had slightly different takes on how they choose to focus their stories. O’Connor said that she writes about the things that keep her up all night. She writes about world events that she’s struggling with in an effort to work her way towards an answer. Eason, on the other hand, needs to fall in love with an idea if she wants to write about it well. Even if she were to stumble onto a lucrative concept for a play, she admitted that she couldn’t bring herself to write it unless it was an idea she felt passionate about.

The panel concluded with each artists discussing their past productions, and describing the process by which a story gets executed. They illustrated how much heart and sleepless nights goes into each work. They also encouraged the audience to be true to themselves in their artistic pursuits, but also to consider other modes of storytelling besides movies and television. As Cortés said, you don’t have to go to Hollywood and fetch coffee in order to pursue your dreams.