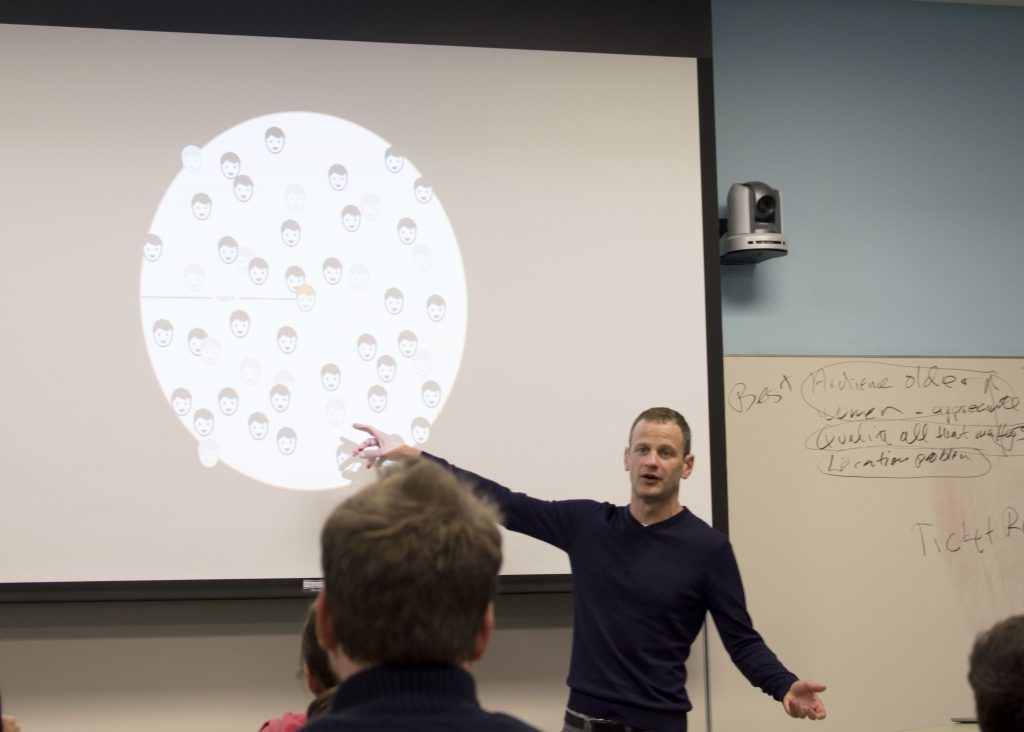 How do we create and manage our identities online? Jeremy Birnholtz, an associate professor within the School of Communication, joined the MSLCE cohort for the first faculty talk of the quarter to discuss his focus on human-computer interaction, particularly with social media. Students learned about the establishment of virtual boundaries and various dialects within the gay dating app Grindr.

Based on 36 interviews, Birnholtz and his team went directly to the platform itself and began talking with strangers about their experiences with Grindr through Grindr. Conducting interviews in Ithaca and Chicago, researchers quickly noticed a major contrast between urban and rural communities and the available opportunities. Despite this difference, Birnholtz noted that “sex is a huge motivator. People care a lot about how they present themselves online.”

There is a certain amount of trust needed to make Grindr work, and people go to great lengths to ensure that they are getting what they want. Users can add “looking for” or “not looking for” phrases in an attempt to filter out unwanted engagements. In addition to nuanced language, men often tailor their profile photos accordingly to what they are seeking; a headless torso shot isn’t going to convey the same message as a picture of a smiling face. Based on these social cues and specifications, Grindr is actually a rather brutally honest representation of the open intolerance that can exist within the gay community.

Birnholtz’s research on this topic has become more difficult lately. In addition to running out of grant funds, a Chinese company recently bought the Grindr app. Rather than studying how gay men broadcast their identities to the community, it now becomes a question as to what will happen with the massive amount of personal information that has now been transported over to China. In a country where personal data isn’t held to the same safety standards as it is in America, it will be interesting––and potentially devastating––to see how Grindr will evolve under new ownership.