MSLCE Professor Researches Globalization by Looking at Opera and Fashion 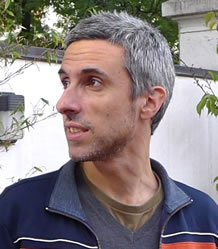 Today, we continue our feature where we ask an MSLCE professor three questions about the creative field they work in. Below is a conversation with Claudio Benzecry about globalization, sociology, and high-end fashion.

How did your study of the Colón Opera House lead you to your current project looking at the world of high-end fashion shoes?

My first book, The Opera Fanatic, was an exploration of what it means to love something and started my journey of exploring the subjective as a particular kind of category. Instead of opposing it to what is “objective” I became interested in how it is a particular knowledge form that needs to be studied systematically. So as a follow up to a book that explored in depth the collaborative work of producing the opera fanatic as a peculiar embodiment of taste, instead of the more obvious ethnography of fandom or musical practices, I thought of another subject that is usually conceived as either over-determined with “social” character or as irrational and frivolous: fashion.

There is nothing at the same time more distinctively individualized and widespread than female footwear! This book renews my interest in what is the micro and collective assemblage of categories that are usually thought of as non-sociological or as private responses, moving from the study of musical passion into the realm of aesthetic judgment about design, shifting towards a new emphasis on the visual and tactile character of those evaluations. Unlike the localized world of opera fans, I’m following here the many mediations through which a shoe is put together around the globe.

What first drew you to the topic of globalization?

I was a student of Neil Brenner and Harvey Molotch at NYU, and had also taken classes with Saskia Sassen and other scholars who are very much interested at the political economy level of the link between urban theory and globalization, but I always thought they didn’t do enough justice to the interaction between the macro and the micro –usually gave too much way to the former- and to how meaning and individuals experience played a role. In the last few years there were an upswing in books by historians and anthropologists (Greg Grandin on whaling and the slave trade, Paul Gootenberg on cocaine, Anna Tsing on timber and mushrooms, Caroline Knowles on flip flops) showing the intersection between globalization, commodity production, the multiple meanings attached to it and individual lives that inspired me to think my own work within those new coordinates.

How can the sociology of culture approach be useful for understanding the digital age?

I think there are three ways to respond this. The first one is that when we think of digital culture we usually think of disembodied, de-territorialized phenomena, and one of the approaches from the sociology of culture (the production of culture paradigm) actually allows you to study the mechanisms to “place” culture. There are still institutions, rewards and careers behind the new ways of producing culture. The same applies to distribution platforms. The second one is that ethnographic approaches to the study of digital culture should allows us to see all the infrastructural work of maintaining things in place, the workers who are at the warehouses, the work or repair and upkeep to have things running as we have gotten used to. The third one is that meaning is still generated in a way that could benefit from a rich hermeneutical approach –what people have called “cultural” sociology, and that the celebratory discourses of innovation and disruption are themselves phenomena to be analyzed sociologically.