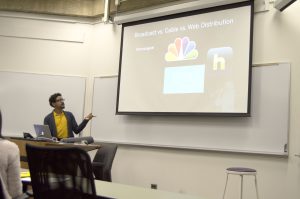 A documentary miniseries about police brutality. An animated short about dinosaurs. A hybrid scripted series focusing on a long-forgotten art movement called “Fluxus.” These projects and more were among those presented in our final Digital Television class with Professor AJ Christian.

Whether individually or in a pair, all of us had to create a webseries – episode scripts, season treatments and character descriptions included. Beyond the creative side, though, we also had to map out financing and marketing plans. Making a television show isn’t just about bringing the world to life – we need to know how to make the program a reality in an ever-evolving marketplace.

Some of the shows, like a time-travelling comedy series from Scott Lederman, were more similar to traditional network fare in terms of format and structure. Some, like a sketch series from Ali Riddle and Seth Zimmerman about a girl “breaking up” with her best friend, utilized shorter episodes. We were encouraged to draw on all the lessons we had learned about the television industry and how it has adapted to online distribution and streaming platforms.

Jared Corak, the only one of us who filmed his final project, showed off the first episode of a Filipino cooking show featuring a delicious-looking pork adobo. I was admittedly disappointed that he didn’t bring samples of the finished meal into class.

Another option for the final project was to assist with a previously-established work. Two students, Krystal Zheng and Steven Whitney, chose to help Prof. Christian during his seven-day OpenTV live marathon. They showed off pictures and video from their times on set.

As the quarter comes to close, I can safely say that Digital Television has been an eye-opening experience. The future may be unwritten but we now have the tools to create meaningful content that appeals to whatever unique audience we want to reach.