MSLCE GETS A BACKSTAGE GLIMPSE INTO LIFE AT THE GOODMAN THEATRE 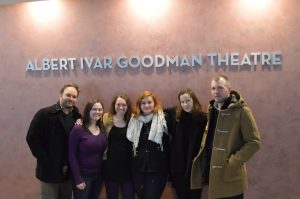 Located in the heart of downtown, the Goodman Theatre has been a staple of Chicago theatre—and cultural life—for over 80 years now. The theatre has seen the world-premiers of dozens of playwrights, from David Mamet to Mary Zimmerman, and is committed to producing both classical and new work.

The MSLCE program recently visited the theatre, sitting down with Producer Steve Scott to discuss his role in the day-to-day running of the theatre, the history of the Goodman, and what’s next for the Chicago institution.

As Producer, Scott has executed on over 200 productions at the Goodman, working closely with both Artistic and Executive staff to oversee the realization of the shows. Scott’s managerial duties require him to play a part in nearly every departmental operation in the theatre, a job that is as fast-paced as it is fascinating. “It’s is a lot of answering questions and putting out fires,” he stated. Scott acts as not only an artistic sounding board and resource to staffers, but as a problem-solver when challenges arise with a production.

In addition to speaking about his role at Goodman, Scott shared some welcome advice with MSLCE students about making it in the Chicago theatre industry. He spoke about the importance of loving what you do, explaining that one of the qualities that made the Goodman such a special place of work was the fact that everyone involved in the running of the theatre—from the Marketing staff to the Production staff to the actors on stage—had a shared passion for theatre as an art form.

Following their conversation with Scott, the MSLCE cohort was taken on a special backstage tour of the Goodman, getting glimpses into rooms and people who facilitate the a season of six productions and countless educational programs. Behind the two theatres—the Albert and the Owen—is a maze of costume shops, wig shops, green rooms, loading docks, and trap doors that all go into making the magic on stage happen. During a peak into the Albert Theatre, the Goodman’s 856-seat mainstage theatre, students were able to watch Production Staff load-in the next production. The theatre was filled with sounds of hammers and drills as the team filled the stage with the newest set pieces.

After just a few hours in the Goodman, it was clear that behind every actor and costume piece that the audience sees on stage, there are hundreds of dedicated and talented theatre-makers working together to bring these productions to life.