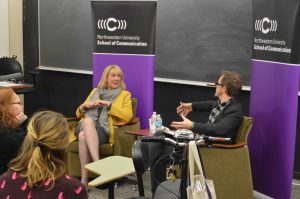 “They have laid down such a strong footprint,” Dudley said of Wolf’s Chicago franchise, “and because of that it generates more opportunity.”

The Illinois Film Office began in the late 1970s in order to attract film production to the state, mainly to the city of Chicago. Dudley explained that, originally, scripts had to be approved because the first Mayor Daley had strong opinions of how the city should (and shouldn’t) be portrayed. However, when Jane Byrne became mayor, she went out of her way to accommodate John Landis’ Blues Brothers, beginning what Dudley refers to as the “renaissance of Chicago film.” Next, John Hughes shot hit movies like Ferris Bueller’s Day Off, Home Alone, Sixteen Candles, and The Breakfast Club either in Chicago or its surrounding suburbs.

The state offers a tax credit to productions, something that has become standard in the industry over the past couple decades. The credit promotes in-state employment and economic development by mandating that it only be used with Illinois residents, and spending on Illinois goods and services. The state also requires productions to submit a plan that reflects at least 20 percent diversity in their staff.

“We are the only state that requires a diversity plan,” Dudley said.

The Illinois Film Office receives about 350 applications annually. One reason why is the variety of scenery the state offers, from urban to suburban to rural.

“It’s a great state to basically offer whatever you need, and that’s part of our pitch.”

Recently, Dudley explained that the state’s television history had reached an important milestone: filmmaker Steve Conrad (The Weatherman) is shooting his Amazon Studios series in Chicago, but the state is a stand in for a wide range of domestic and international locales including Washington, D.C. and Luxemborg

“It has nothing to do with Chicago,” Dudley said, “but it’s shot here.”