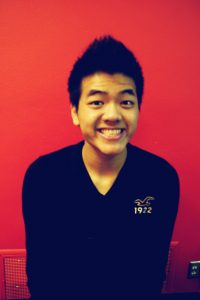 “It was really important for me to submerge myself into the great American culture,” he said of his time when he had first arrived here.

Li is interested in working in marketing and public relations, which he sees as great opportunities to make a living while learning as much as he can about American culture. It’s that interest that first drew Li to the MSLCE program.

“I think that the focus on creative industries will be a good starting point for me to know more about this country, and will benefit me in my future career,” he said.

In addition to the program’s focus, MSLCE also attracted Li because of the personal attention it provided through its courses.

“In a small program, friends and professors will be closer to you,” Li said. “They will notice you more and talk to you more. In this way, I would have the advantage to know a small group of people more than a group of 100 student class.”

Ideally, Li hopes to one day have his own PRm advertising, or marketing firm. It’s an ambitious goal, but Li has a humble approach to getting there.

“I want to work my way up through success and learning through my mistakes,” he said. “In order for me to become a manager or CEO of a company, I think I still have a long way and more things to learn.”