They’re So Talented: Producers of Our Names Are Sam Talk Chicago TV, Representation in Mainstream Media, and Building a Series from Scratch 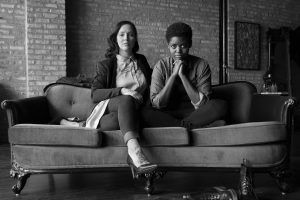 Sam Bailey and Sam Lee, the two minds behind OpenTV’s webseries You’re So Talented, came this past week to speak with Prof. Christian’s Digital Television class. Bailey and Lee frequently work together as the creative production duo Our Names Are Sam and they had a lot to teach us about the challenges of making indie content in Chicago.

“This kind of show gives me complete control over my artistic process,” said Bailey, You’re So Talented‘s director, writer, and lead actor. However, she also stressed the need for a co-collaborator – Lee, with her background in digital media, fit in perfectly with Bailey as a producer. Together the two have a “working class mentality” that drives them to create a multitude of stories.

“People want something that looks different from mainstream media,” Bailey explained. Putting her story at the center of You’re So Talented is just one example of Our Names Are Sam’s dedication to exploring underrepresented stories in traditional Hollywood media. “The show is clearly her [Bailey’s] vision,” said Lee. “There’s a lot of work about characters of color that’s not written by characters of color and audiences can tell. I really believe that.”

Digital content distribution has clearly had an enormous effect on the stories and characters that creators can feature – however, the form is not without its potential hiccups. On a producer-driven webseries, everyone involved needs to be “passionate about the end product.” When Bailey and Lee crowdfunded for Season 1, they only got half of the money they originally wanted. The only option? Make it work.

Hearing from Bailey and Lee was an eye-opening experience. If you want to create content, go create it. Webseries allow creators to make their particular vision a reality like never before – whether or not it looks like the America of network TV.

Bailey and Lee plan to keep creating content in Chicago ranging from a feature film to more commercial art. Check out the awesome first episode of You’re So Talented Season 2 on the show’s official site.

Tags: OpenTV, You're So Talented