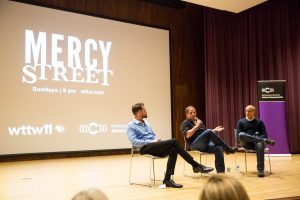 “Mercy Street”, a big move for PBS, is its first fictional program in over a decade. It’s designed to complement the popular dramatic series it imports from Britain like “Call the Midwife” and “Downton Abbey”. Executive producer David Zucker, and executive producer and head writer David Zabel discussed the creation of the show. Both men have great experience in making television: Zucker also recently produced “Man in the High Castle” for Amazon, and Zabel wrote for “ER”.

“Mercy Street” was originally developed as a documentary about Civil War medical advancements with dramatic re-enactments before PBS hired Zabel to reimagine it as a drama. PBS has limited financing for commissioning television, which caused a tightly scheduled production. However, there were several advantages to a small budget for Zucker and Zabel: filming locally in Alexandria gave them the ability to cast for eighteen major roles, primarily from the local theatre scene. Many of the locations for filming were the actual locations from the period, and that relatives of the families depicted came forward with more information about their ancestors.

During the Q&A, the audience asked about the authenticity of some of the medical and historical background. Zabel said he thought it was easier to write the medical scenes for “Mercy Street” than it was to write for “ER” – the historical medical topics give each episode a unique story to center on. He drew on memoirs like Louise May Alcott’s books to provide period color. They also enjoy correcting misconceptions about Civil War-era medicine, incorporating the availability in hospital situations of anesthesia for amputations into a rivalry between two of the doctors.

Even though “Mercy Street” is intended to have a heavy focus on historical reenactment and many characters are composites, Zabel and Zucker looked for stories from the period that have contemporary resonance – like PTSD in returning veterans and addiction to opiates.