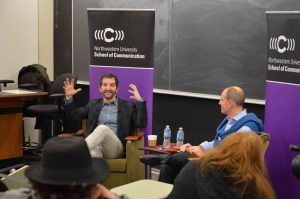 Harry Gottlieb has been through a lot in his career. His company, Jellyvision, made some of the biggest hit computer games of the ‘90s. His company has also almost gone out of business three times.

So when he was asked at the MSLCE Speaker Series event last Thursday to briefly describe his professional path, he responded, “Brief is the only part that’s going to be hard for me.”

Before Gottlieb was making computer games like You Don’t Know Jack and Who Wants to be a Millionaire?, he was a teenager interested in making fun, educational movies about dull subjects.

“I’ve always been fascinated not just by moviemaking, but by taking subjects that are really boring and making them digestible,” Gottlieb said.

He started a company after graduating from college and began mulling over an idea for a computer program: a trivia game where, if the player got a question wrong, they would get made fun of by the host. Using tools of film production — audio, video, and scriptwriting — Gottlieb and his team made a game where players would feel like they were really interacting with the virtual host. The results were surprising, and amusing.

“People would type in [an expletive], and I said, ‘Let’s recognize that,’” Gottlieb said. “So the host would say, ‘Are you talking to me like that? On my show?’ and then their score would plummet.”

You Don’t Know Jack sold 5 million units, and Jellyvision was asked to design a game version of the hit television show Who Wants to be a Millionaire. Then, the computer software market bottomed out. Jellyvision contracted, and Gottlieb thought about what to do next. He went back to his usual question: “What’s super boring and complicated but very necessary that we can make fun and interesting?”

His answer: Insurance. That led to ALEX, an interactive program that uses humor and straightforward language to teach corporate employees about health care plans and retirement savings. Like Jellyvision’s computer games, it’s been a hit.

Gottlieb attributes some of his success to the workplace culture he’s cultivated at Jellyvision. He advised students in the crowd to appreciate the value that individuals bring to a business.

“Getting people and treating them well, which I’m proud to say we’ve always done, is key to success,” he said. It’s people who build, who do the sales… How they feel about your company is incredibly important.”

Tags: ALEX, Harry Gottlieb, Jellyvision, MSLCE, Who Wants to be a Millionaire, You Don't Know Jack