MSLCE Student Hopes to Be a Professional Pop Singer 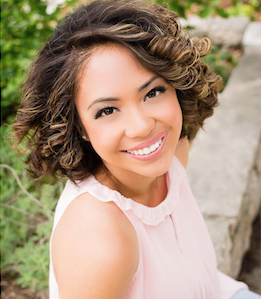 Linling Navarro has set her sights high: she wants to be a pop star.

“The end goal is to become a professional singer, performing in huge venues, touring, selling albums,” the MSLCE student said.

It’s an ambitious goal, and one she’s been already working towards for years. As a Northwestern undergrad studying vocal performance and opera, Navarro looked for opportunities to perform crossover songs that drew on both her classical and pop/R&B preferences. She performed with the Northwestern Community Ensemble Choir, a group she says she “fell deeply in love with.”

Then, when she graduated, she decided MSLCE would be a great way for her to become even more prepared to enter the music industry.

“I knew that this program would be able to bridge my lack of knowledge with the business side of the industry with my performance skills that I learned as an undergrad,” she said. “My plan is to go through this program, learn as much as I can about the industry… and after that, just begin my professional career as a singer.”

If it sounds like she’s dreaming big, it’s because Navarro’s already proven that she can overcome life’s most challenging obstacles. She’s a childhood cancer survivor, something she considers “a huge part of me and my background.” It’s the reason why Navarro hopes that, in addition to becoming a successful singer, she can create a nonprofit organization for childhood health awareness. After her cancer diagnosis, Navarro’s parents raised her by stressing a healthy lifestyle with a good diet and exercise, and she hopes to pay that awareness forward to other families with children who have been diagnosed with cancer.

“I want to be able to provide an environment for those families and those kids as well,” Navarro said.

In the meantime, Navarro plans to learn about the music industry, and figure out her own musical style.

“With all musicians it’s definitely about starting out small and gradually working your way up,” she said. “I was given the advice from someone who was a performer in the industry stay true to yourself no matter what.”