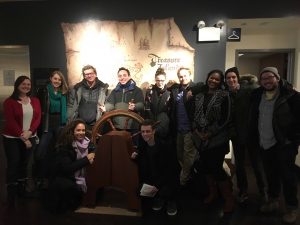 The Lookingglass Theatre’s ‘Treasure Island’ production takes our childhood daydreams to the stage in an exciting space that feeds off the senses.

MSLCE students ventured downtown to Michigan Avenue last Wednesday to experience Mary Zimmerman’s vision of the classic treasure hunt story. Unlike larger performances, ‘Treasure Island’ keeps its audience close to the action with only a few rows of seats placed around the perimeter of the stage.

Rarely do we find stages in our imaginations, and the same goes for Zimmerman’s production. Cast members run, climb, stumble, swordfight, hide, sing, dine, dance and live on a suspended platform resembling an old pirate ship deck. With long, sturdy ropes––or lines if you have a more nautical vocabulary––holding the deck up, there are instances when the ship will actually lean towards one side during voyages and rock back and forth due to rough seas. The boat is showered with cannonballs, and sand falls from the sky at points when the audience least expects it. Complete those physical aspects of ‘Treasure Island’ with a highly emotive set of characters, and you have a truly immersive and unconventional production that captivates its viewers from start to end.

Reinventing ideas is just as challenging as inventing them. More often than not, the storylines, designs and concepts are already out there, but they aren’t always out there because they’re perfect. The premise of ‘Treasure Island’ is nothing new, but what Mary Zimmerman has done is new. Remade content does not exist to inform. It is there for us to reimagine something.

I walked in knowing the story, but I did not know how it would be woven together. Knowing but not knowing is what keeps a creative product alive and enticing. I believe the Lookingglass Theatre did a spectacular job of treading this difficult line throughout the production. Zimmerman, along with her cast and crew, proved that they deserve that gold in the end.