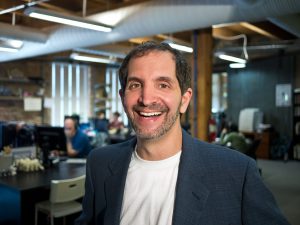 Harry Gottlieb makes learning fun, and that means making it funny. It’s something he’s good at because, in one way or another, he’s been practicing for decades.

Gottlieb is the founder of Jellyvision, the Chicago-based multimedia company behind the trivia computer game You Don’t Know Jack and, more recently ALEX, an interactive program that uses humor and straightforward language to teach corporate employees about health care plans and retirement savings, to name a few of its offerings.

“I’ve always been super interested in making and learning and engaging,” Gottlieb said, “I’m particularly interested in things that are non-interesting and complex.”

Gottlieb will be discussing his career at Northwestern on Thursday, Feb. 4 at 5:15 p.m. He traces its start to when he was an 8-year-old boy who got his hands on his dad’s Super 8mm film camera. His dad showed him how to slowly pan the camera from one edge of a scene to another, so that the movement wasn’t a sudden blur. It was the first time Gottlieb realized that “you’ve got to be thinking about what the audience is going to see when you’re done.”

This lesson has guided Gottlieb throughout his career.

“Looking at it through the eyes of the audience is the start, for me, of the whole enterprise,” he said.

Years later, he got the chance to produce training videos for new employees at Sunset Foods, a chain of grocery stores along the North Shore. Gottlieb learned that an effective video was funny and playful, but didn’t downplay the importance of the material.

“The humor is part of what is telling the story,” and not just a distraction from the story, Gottlieb explained.

Throughout his career, Gottlieb has seen the corporate world learn to share his embrace of engaging with and thinking of target audiences. When Jellyvision first began marketing ALEX about five years ago, Gottlieb had to defend the use of humor in corporate communication. Now, ALEX is used by 70 of the Fortune 500 companies.

“I think this has happened in almost every industry,” he said. “Engagement became the buzzword.”

Gottlieb looks at his successful career as the result of originality and good timing.

“My three biggest successes,” he said, “every single one of them has been, ‘Okay, no one’s seen anything like this before.’”