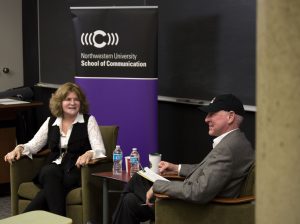 Days out of Northwestern, Jane landed a job in the then-nascent field of ‘corporate AV (as it was then called) and never looked back.   Producing meetings and events for blue chip companies required a boatload of skills: theme development, proposal and scriptwriting, budgeting, casting, art directing, to name just a few — skills honed in real time, on the job.

A series of bigger jobs then led to her current position at the #1 network, CBS. What Jane does for the most part, however, does not air.   She functions as a sort of –in-house creative agency for the network, producing large events, presentations and special video projects.

“My job is so varied – I can never predict the nature of the next project — but that’s what I love about it,” she told the crowd.

Perhaps the most important part of her job is the oversight of the CBS Upfront presentation, a huge, annual sales event that brings 3,000 advertisers, press and the TV creative community to Carnegie Hall each May to preview clips of the new season shows and entice them to buy first on CBS.

In addition to showing the pilots, “the event is really a major branding opportunity,” she said. “We might showcase on air talent like Stephen Colbert or Hall of Fame quarterbacks to tie into the upcoming 50th Superbowl.   Depending on what’s on the slate for the year ahead, we stitch together creative elements that are thematic to our messaging. The great thing about working for a broad-appeal network like CBS is that for events like these, we use our own entertainment equity – we don’t have to outsource entertainment value.”

Gottlieb went to Northwestern (SOC) for her undergraduate degree, and the way she got her first job speaks to the era in which she graduated. It came as a result of her pouring through the phonebook – people actually used them then! – for listings under “production.”

“After making dozens of calls I somehow reached the principal of a small but thriving Rush St. production company.   As luck would have it, she was an NU grad — barely 30 — and took pity on me I guess,” Gottlieb said. “She hired me on the spot – on the phone. She was my first and best mentor.”

She told the MSLCE students that she was “blown away by your sophistication and your real-world experience.”

She advised those in the room who would eventually pursue jobs in television to be indispensable employees if they wanted to get ahead.

“Relieve your boss of burdens,” she said. “It’s so important to make the person you’re working for think, ‘Oh, that’s such a relief, I can cross that off of my to do list.’

Managers in creative jobs are often over-taxed and over-scheduled, so anything you can do to make their workday easier, will make you very valuable to them.”

Her biggest piece of advice: “ideas are your currency in the creative world.” Good ideas will open doors, create opportunities, and help build a successful career.”