From Sculpting to Stand-Up Comedy, MSLCE Student Reimagines Her Career in the Arts 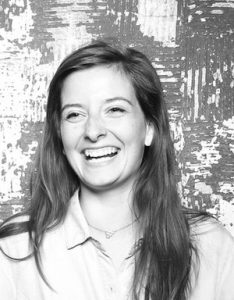 Allison Riddle has long intuited her life would revolve around the arts; however, it wasn’t until a couple of years ago that she even imagined a career in comedy.

Riddle attended Eastern Michigan University, and during that time she developed her skills as a sculptor using non-traditional materials like fabrics and fibers.

Upon graduating in 2012, Riddle was confident she wanted to work in the arts, and equally confident that she didn’t want to be an artist.

She worked a couple of non-art jobs, including marketing for the Jimmy John’s restaurant chain, before spontaneously moving to Chicago two years ago and discovering her love of comedy.

“I took some classes at Second City that I really enjoyed but I don’t want to perform. I’m more into the writing aspects of things,” said Riddle.

Nevertheless, she has continued to pursue the performance side of comedy, acknowledging the need to understand the performance experience on stage in order to write comedy for others.

Since 2013, Riddle has continued to work with local comedians and is currently developing a project with a partner, writing, and potentially filming sketches so that they can be distributed on line.

As she began to navigate her career change in a different artistic scene, Riddle applied to the program, hoping to acquire a broad enough skill set to allow her flexibility as she acquires clarity regarding her career.

“The program has allowed me that chance to change my mind and be a little unsure. It has exposed me to people from such diverse creative backgrounds that they help shape my creative future,” said Riddle.

She also underscored the professional advantage of attending the same university of some of her heroes of modern comedy like Seth Myers and Julia Lewis Dreyfus, and with such a broad alumni network.

Eventually Riddle would like to venture into the production side of comedy, helping bring all of the elements together. “I would really be interested in helping emerging comedians promote and produce their work so that it can be seen,” said Riddle.