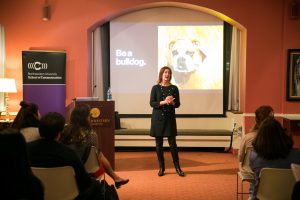 Caggiano spoke to Northwestern students during an EPICS event.

A rarity in the advertising world, Jeanie Caggiano is still at her first agency. When Leo Burnett came to Northwestern’s career fair, she was the first in line.

More than 30 years later, Caggiano has climbed her way to executive vice president and creative director of the Chicago-based worldwide advertising company.

“Don’t be shy to ask to shadow somebody for a day”, she advised students during an event hosted by Northwestern University’s Office of External Programs, Internships, & Career Services (EPICS).

A Northwestern alumna with a B.S. in Speech and an M.S. in Advertising, her career path seemed well planned ahead of time: she had taken an ad class during her senior year, and then went to Medill to complete her graduate education.

Caggiano half-joked that “tuition is not about education,” with networking playing such a crucial role in professional advancement. However, she pointed out that background knowledge does matter, in addition to dedication.

“Passion really counts, but you may need to go to an ad school as well,” said Caggiano, who see brands as people, and understands her job as giving them personality.

The executive spent 12 years running the Allstate Insurance account at Leo Burnett. She bantered about the challenges of managing advertisements for insurance companies.

She suggested that the strategy often implies acknowledging that “people hate health insurance companies” and the goal is convincing people to “please hate us less.”

“You have to show them that love is stronger than death,” said Caggiano.

She acknowledged that the emotion-for-emotion’s-sake phenomenon exists in the industry, but argued that in order to use emotion effectively, it must fit into a broader strategy that sets it apart.

“It is a weapon or tool to be used, but I can’t make a brand commercial without telling the story of it,” she said.

With regards to modern advertising, she highlighted how the Internet has changed the battlefield of advertisement.

“People watch television more than ever, just on different screens,” she said, “thus making things people want to share has become a new game of advertising.”

Fortunately, humor is universal, across time and space. After sharing six useful “Jeanie’s rules”, she offered a seventh guideline: “Don’t let down your audience. Make them laugh or make them cry, but do not make them want to go the bathroom.”