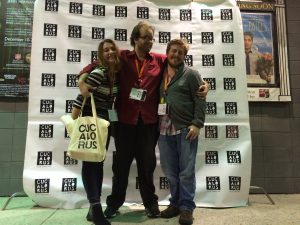 “Harry we’re rush!” I yelled to my director as we ran from the ticket counter at Thalian Hall, one of the oldest movie theaters ever built.

“We’re on rush! We sold out! People have to put themselves on a waiting list to get into our screening.”

We were attending the Cucalorus Film Festival in Wilmington, North Carolina. It was half an hour before the first time our undergraduate thesis film had ever screened at a festival, and we had a packed house. As the film’s producer, I couldn’t wait to share this news with director Harry Rossi, writer Jake Kath, and cinematographer Isaac Banks who were all in attendance.

We had worked with an imaginative team of creatives every day for over two years, more than half our time at the University of North Carolina: School of the Arts, to make a 19 minute comedic musical entitled “Just a Body.”

Wilmington is steeped in film culture, and this festival has an incredible philosophy when it comes to bringing filmmakers together. 85% of Cucalorus’ revenue goes to supporting filmmakers, which made the whole experience incredibly communal. This made “networking” with the other filmmakers and film enthusiasts feel more like “connecting” and gave me some real world experience in leveraging the networking skills I’m learning in the MSLCE program.

Our dark comedy musical played with a block of short films, all with very diverse styles and scope, but all centered around dance. “Just a Body” played at the end of the block. We enjoyed watching and listening to the entire audience laugh and gasp at just the right moments.

After watching the large variety of films and meeting so many artists, I watched our film end and looked at the list of over 200 credited cast, crew, vocalists, and musicians flash on the screen, and I reflected on what it means to be a filmmaker. The digital age has given way to much more ease of creation and artistry. My goal continues to be to produce independent narrative feature films, and I’ve been inspired to create with whatever resources I have around.