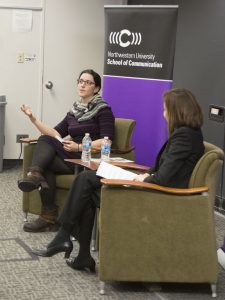 As the first full-time employee hired by Indiegogo, Erica Labovitz has worn many hats while the company has grown into the crowd-funding giant it is now.

“I was sort of a one man show in marketing for about a year and a half,” she said during a speaker series event last Thursday at Northwestern. “I like to say I’ve done a little bit of everything besides coding, and I have yet to pay a bill.”

During the event, in a packed room in Frances Searle, Labovitz discussed the trajectory of her career and what she’s learned along the way, including her experience as a master’s student in Northwestern’s School of Education and Social Policy.

“What I learned here were a few things about working with people, how to collaborate with people who have varying levels of experience,” she said, adding that this skill has been invaluable for working in the technology industry. “When you bring a group together with different experiences… often times it’s easy for people to talk across each other.”

She also told attendees not to be afraid to learn about technology. The earlier, she said, the better.

“I really, really wish I had done more in technology, that I’d taken one computer science class,” she said. “I never expected to go into technology… but I wish I understood it better and quicker.”

Labovitz also discussed the way that the technology industry has changed since she moved to San Francisco to join Indiegogo.

“When the founders started Indiegogo, they pitched dozens of venture capital firms and got rejected from all of them and they had a business model that worked and customers,” she said. “Now, it’s not uncommon to see businesses raise millions of dollars without that proof of concept.”

Labovitz advised students in the room to always keep their ears open, not just for opportunities but for learning.

“Listening is much more valuable than talking,” she said. “I was very confident when I left school that I had a great foundation in academics and work experience, but I think the best thing I did was have some humility with that confidence to soak up others’ knowledge like a sponge.”

Labovitz said that it is important for people to maintain connections with smart, driven people, both for inspiration and opportunity.

“I wouldn’t be where I am today if it weren’t for the people I met along the way and staying in touch with them,” she said.

View clips from the speaker series event on YouTube here.