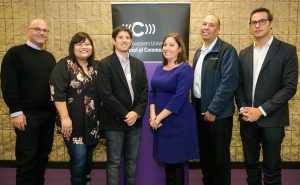 “The industry is a social environment first and foremost,” said Secret Hideout producer Jeb Brody. Currently helping oversee Universal’s rebooted monster movie Universe, Brody stressed the importance of building meaningful connections in the entertainment industry. This sentiment was echoed by the remaining five professionals who stopped by my table.

“Keep meeting people,” said Li-Wi Chu, the Head of Feature Film Development and Production at Partizan. As someone who started out making music videos and moved up through Partizan to the forefront of the company’s motion picture department, Chu’s words rang true.

Jeff Goldenberg, a manager at Kaplan/Perrone Entertainment, has also found success in many different aspects of entertainment. Having worked across development and talent, he offered this to burgeoning TV creatives: “Pitching is all about the characters.”

Goldenberg also discussed the “big three things you can control in Hollywood” – money, material, and talent. Gaining access to one of these pillars is a worthy career goal.

On the behind-the-scenes side of content creation, Disney Channels VP of Programming Robin Faerber and Big Shoulders VP & Partner Brad Fox each spoke about the importance of knowing your target market and balancing “gut and metrics.”

The last person who stopped by our table was CAA Agent Jeff Jacobs, co-head of the agency’s television department. He focused on the work involved in getting a job in the industry and how to approach people “without being a nudge.” He also provided us with four rules for breaking into the industry:

Overall I found the EPICS Roundtable to be a great opportunity to gain perspective on feature film development and to meet a group of professionals all worth emulating.