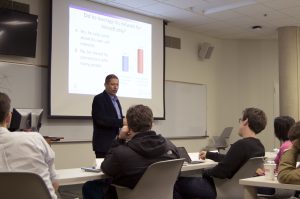 Contractor studies the formation, maintenance, and dissolution of dynamically linked social and knowledge networks in a variety of contexts.

“I’ve grown to see everything as a network. I hope to infect you with the same bug.” With these words, Northwestern Professor and social network expert Noshir Contractor kick-started an all-day workshop with the entire cohort of MSLCE students, last Saturday, November 14th.

Contractor serves as Director of the Science of Networks in Communities (SONIC) Research Group alongside teaching positions in the McCormick School of Engineering, the School of Communication, and the Kellogg School of Management.

The session began with a look into the history of social connections since the early 1900’s, before diving into understanding the balance between efficient networks and happy networks.

“Networking doesn’t have to feel icky – it can come from a place of giving, gratitude, and comfort,” Contractor explained. With social networks bringing people together like never before, we need to be conscious about making – and maintaining – both strong and weak ties.

Defined network positions included pulse-takers, who have a good handle on the feelings of multiple groups, and brokers whose high centrality can help lead them to creative recombinations of ideas. This felt especially pertinent to the social landscape of the creative industries.

To better illustrate his point, Contractor led the class through the online game called “6 Degrees of Separation.” The game, which involved sending messages to specific people using the cohort’s pre-existing network, demonstrated the value of being well-positioned in different social spheres.

The research determined that racial, gender, and even geographical differences between teammates correlated with a higher success rate.

“True scientific achievements are made by teams, not individual heroes,” he concluded. For us MSLCE students, who come from a variety of different educations and locations around the world, Professor Contractor’s lessons rang true.