Designed to Innovate: MSLCE Students Take a Trip Through the Lookingglass 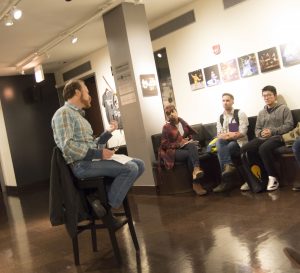 Upon leaving downtown’s iconic Water Tower from a site visit to Lookingglass, I ran into our speaker and company Artistic Director, Andy White. He was picking up a sandwich board from the theatre’s sidewalk that had fallen over, prey to the Chicago winds. To this day Mr. White continues to unpretentiously treat his leadership duties as if they were maintaining performances in the edgy shacks and night clubs they started  at in 1988.

“A big part of my job when we began was proving to artists that they were simultaneously producers,” White mentions, mid-greeting a staff member that accidentally stumbles into the room. In fact, he stops every time an employee walks through the lobby to introduce us to who they are and what they do, as if he were revealing an inside joke.

“When we started, we knew we were doing something different for the city,” Andy says. The company’s mission is truthfully quite unusual for a city respected for its improv and kitchen-sink dramas. From high-flying acrobatics to immersive culinary experiences, Lookingglass Theatre is unlike the rest. Highly focused on design, their values are ambitiously forged in collaboration, invention, and transformation. While narrating the company’s story, Andy proudly points out the pictures behind us to reference their vivid, colorful imagery.

“Design is a major part of our brand,” White starts but stops. ” No…brand is too small a word. More like ideology.”

No matter the gorgeous, transformable black box or the epic artistry exhibited by the organization, Andy still talks about the trouble of selling tickets. Situated at the center of Chicago’s commercialized Magnificent Mile, the Lookingglass building sign sits hidden behind a bush with a tiny lettered logo claiming their territory. This is partially due to advertising restrictions in the area enforced by the city. Andy discusses the usual obstacle of attendance claiming the challenge is due to pricing and perceived accessibility of their content. Dedicated to new texts entirely, White describes the “intentional deficits” they bring upon themselves and the remedies they use to balance those risks (i.e. big name directors, one well-known title per season, etc.). Last year the company even commissioned Claire Ashley, a successful, whimsical Chicago based artist, to create larger-than-life inflatable whale tails as street art marketing for their production of Moby Dick. The show, itself, was originally developed at Northwestern as part of a new works incubation program.

No one can deny that Lookingglass brings a unique and innovative element to Chicago’s theatre scene. I couldn’t help but wonder how a company so heavily lead by design in their storytelling is adapting to an era of new media and technology for entertainment. How will they continue to reinvent the theatre-going experience for Chicagoans? With culture and leadership like their own, they should easily rise to any creative occasion and simply try something new.