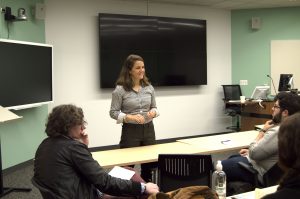 After describing her early experience in a toy company as a product designer, Gerber told us about some myth-breaking moments that led her to reconsider her career path. At that time, her company was in downtown San Francisco, hiring lots of Berkley MBAs to source children about toy design.

“I became quite cynical about the idea,” Gerber said, “how can a creative company train people to be creative?”

When the Internet started to challenge the traditional ways of idea-collecting, she left the company in order to pursue a PhD in organizational behavior at Northwestern University. She is now the Faculty Founder of Design for America and co-founder of the Delta Lab, and her research focuses on how new technologies and platforms, including sites like Indiegogo and Kickstarter, have affected innovation.

Gerber described the quick ascent of crowdfunding as a model.

“Ten years ago, it was relatively a new idea”, she said. Though it differs from the traditional way of making a product and finding a company to sell it, tension still exists between fundraising and actually producing a final product.

“Crowdfunding does not imply that one can start from nothing.”

She advised the class that networking was key, since that’s how you can communicate to others the value of your idea. If you have dreams at hand yet patrons at a distance, social networking still constitutes an exhausting part for asocial entrepreneurs.

Trust is another thorny problem in crowdfunding. “After one crowdfunding projects is pulled off, public expectation elevates as well,” Gerber said.

Also, “ideas get stolen”, Professor Gerber bluntly stated. She explained that big companies always move faster and can quickly grab the idea, while inventors are subject to nail-biting moments during fundraising campaigns.