An Art and Tech Enthusiast Joins MSLCE to Pursue Both 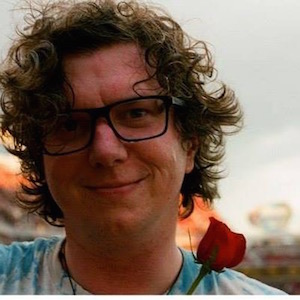 When Stephen Whitney peeks into his future, he sees two things: technology and art.

Figuring out a way to marry the two is what motivated him to apply to the Master of Science in Leadership for the Creative Enterprises.

Whitney received his undergraduate degree from one of the top Philosophy programs in the country, at the University of Arizona, in Tucson.

Whitney moved to the Bay Area to pursue graduate studies, but soon found his interests had shifted towards a more technology. He started working at Apple as a Retail Specialist in 2010 and quickly climbed the ladder until he attained a Genius position.

“My job has not only taught me how troubleshoot and fix computers, but more importantly, it has taught me how to really talk to people and get to the bottom of the issue, which is rarely a tech problem,” said Whitney.

Aside from his enthusiasm about Apple’s corporate philosophy, he enjoyed the opportunity to interact with so many different people.

“Sometimes it feels like I’m doing fast-food tech support and other times I meet phenomenal individuals and it feels more like therapy than like fixing their computers,” he said.

Whitney was drawn to the entrepreneurial focus of MSLCE, as he is interested in learning the skills to pitch ideas and potentially start his own company. His dream, in the long run, is to open his own art gallery.

“I’ve started collecting art and I am interested in marrying art and technology together. I’d like to find a way to give artists more of a connection with the people that want to buy their art,” Whitney said.

The aspect that most excites Whitney about the program is the opportunity to interact with such a diverse pool of people with interests in the creative industries.

“Everybody comes from very different backgrounds: performance art, music, reporting, dance, dance, etc. Collaborating and working with these people and going on trips with them … is really exciting,” said Whitney.