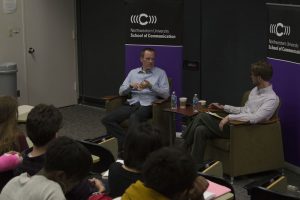 After a decade working as the Chicago Cubs television play-by-play announcer, Len Kasper has made himself an integral part of the local game-watching experience.

“It was a circuitous route to get to where I am today, but I never wavered,” said Kasper, during a talk with students of Northwestern’s Master’s program in Leadership for Creative Enterprises, last Thursday.

At 162 games a season, Kasper spends about 500 hours on the air each summer. He feels like he has the sports broadcast equivalent to tenure, and he remembered when it all began in 2005.

“Midwesterners are very loyal and wary of outsiders so the last thing I wanted to do was walk in like I owned the place. Over time, as you prove you got it right; are a normal human being; are rooting for the team and want be a part of the community, they accept you as ‘one of us’,” he said.

Kasper’s successful career is as much a testament to his skill as it is to his determination and strategy in navigating the sports broadcast industry.

Born and raised in a small town in Michigan, Kasper dreamed of a career in sports broadcasting. As a teenager, he began contributing to a local radio station, doing weekend sports reports and covering a few high school games.

Kasper immersed himself in radio at Marquette University, where he studied Public Relations. Impressed by Kasper’s high school experience, his undergraduate advisor helped him land an internship with the Milwaukee Bucks basketball team as a freshman. There Kasper began to learn the ropes for play-by-play announcing.

Within a month, the college freshman found himself at an NBA exhibition game just yards away from athletes like Michael Jordan, Larry Bird, and Magic Johnson.

Kasper advised students to squeeze all they could out of the networking opportunities in internships, as they could be “hugely valuable” later on.

He pointed out that professionals like himself are increasingly branding their names though social media platforms. His has 65,000 followers on Twitter.

He also predicted dramatic changes in sports broadcast rights in the near future, with teams negotiating broadcast deals directly with companies like Google or Yahoo.

“They will produce it and it will be on the Internet…The day of TV networks having a monopoly, that is going away in 10 or 15 years.  I think TV as we know it will no longer exist,” he said.