Owners of Craft Company Built Business On Friendship and Creativity 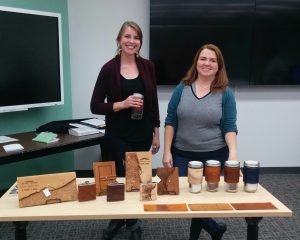 Sarah Kirkham and Anna Warren have no formal business background. However, their collaborative approach to the business side of their creative work has resulted in a successful leather crafting company called Tactile Craftworks.

Last week, the MSLCE Project Management students welcomed the guest speakers from Milwaukee, WI, as they shared their stories and business tips during an hour-long class visit.

With backgrounds in theatre, Kirkham and Warren first met at Milwaukee Repertory, where they were both hired on the same day. Their work stations were opposite each other in the prop shop, and they soon realized they had more in common than shared love for craft and creativity.

“We talked to each other, a lot. We had the same sense of humor, and a common aesthetic,” said Warren.

“We collaborated together really well. We really wanted to create our own work”, added Kirkham.

Soon, the pair began creating leather Mason jar travel mugs, which sold out at local craft fairs. They considered their work a hobby until a trip to Discovery World offered them a chance to view a laser cutter. Knowing a laser cutter would ensure time efficiency and more profitability, the two launched a Kickstarter campaign to raise the $12,500 needed, and exceeded their goal.

Within months the two had quit their jobs and committed to their company full-time. They launched the Atlas Series, vintage maps laser cut onto leather flasks, clutches, and Mason jar travel mugs. Their products are offered in over fifteen stores, and national demand is growing. They have expansions planned for ten additional cities.

Both Warren and Kirkham credit their ability to work well together to a series of common beliefs. “We constantly reassess and redefine our goals,” said Warren. “Honesty and straight forwardness are essential, but we also know how to divide the labor of our work really well”, said Kirkham.

Both women mentioned they like to dream big, but then together create a realistic plan for future goals. Above all, knowing their strengths and having faith in each other has been crucial to their shared success.

“We’re not afraid to ask questions when we need to, but we also trust ourselves and our creativity”, said Warren.

*You can learn more about Tactile Craftworks by visiting their website at: www.tactilecraftworks.com