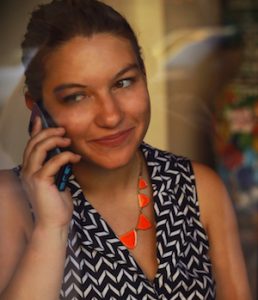 As a kid, Brianna Matthews liked movies. A lot. Born and raised in Boulder, Colorado, Matthews would spend hours and hours of her childhood watching movies while her mom worked.

“Instead of hiring a babysitter, my mom would drop us off at the movies for a double feature and pick us up after work. That is where it all started,” said Matthews.

As her interest in filmmaking grew, she started spending time with artistic people and in high school, would participate in small amateur productions with her friends.

“We made music videos that were kind of terrible. We had one with a talking dog that went to the Spirit of the Outdoors Film Festival. There was also one about a guy that was afraid of water. Basically, anything in which I could get people together and make whatever was available storywise,” she said.

It didn’t take long for Matthews to recognize that her talents best suited not directing or acting in the movies, but helping put all the pieces together.

Matthews went to the University of North Carolina School of the Arts and studied film production. Working her way through the conservatory-style art program, Matthews took part in many different productions of all genres from comedies to action films. She produced several short films and music videos, including “Without,” starring Elizabeth Lail from ABC’s Once Upon A Time. Her final project was a 19-minute movie musical with a cast of over 30 people and crew of more than 65, which is being submitted to the Just a Body to Slamdance Film Festival and South by Southwest.

“My thesis was a humongous project and a challenging undertaking for me as a producer. On set I realized I understood that even though I got the creative part really well and knew how to get all the elements to execute, I didn’t have the entrepreneurial skills to get the bits and pieces into place,” said Matthews.

The desire to better understand the rapidly changing movie industry and prepare herself for the business side of film production motivated her to apply to the MSLCE program, with the end goal of owning her own indie production company someday.

“I want to explore new digital mediums and that is why I also think it is so important for young artists to collaborate and explore the endless technologies available” said Matthews.