An Interview with Anthony Kaufman: Programmer for the 51st Chicago International Film Festival 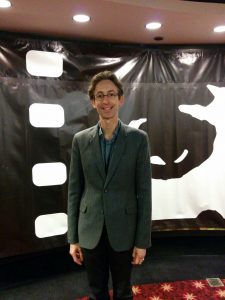 How many films do you watch a year?

Whatever your answer, chances are, for Anthony Kaufman, the number is much, much higher—and with good reason. In addition to his seasoned career as a film professor and writer, critiquing for such publications as Indiewire and Variety, Kaufman is now a programmer for the Chicago International Film Festival, where he specializes in documentaries and independent features.

That means that he was on the receiving end of thousands of film submissions. With three other programmers, he carefully crafted the “balanced program” of this year’s festival, which includes one hundred forty-four feature length titles from fifty-eight countries.

The festival, in its 51st year, is known for attracting international filmmakers and films with diverse cultural and political perspectives. Kaufman uses his “subjective critical perspective” when searching for films that offer a unique point of view. He looks for films that are “visually strong, with great actors and characters.” Aesthetics are an “important driver,” but ultimately, he asks himself this question: “does the film live up to the filmmaker’s vision and intentions?”

Kaufman explained that he enjoys being an advocate for documentaries and independent features films that he believes in, but that might have trouble finding an audience.

“I want to champion them,” he said. He mentioned two such films, In the Underground, a film from China, which he describes as “beautiful, political, and humanist,” and The Very Ordinary Citizen, a film from Iran, making its world premiere at the festival.

In addition to programming, Kaufman spearheaded a new program for this year’s festival, a series of panels called Industry Days. The topics include crowdfunding, digital distribution, strategies for selling your film, women power players in the industry, and international financiers.